I love robins. It delights me when they hop by to say hello while I am gardening, hoping to snatch a newly exposed earthworm or grub. They are virtually fearless and it always makes me smile when they come right up close and ruffle their feathers as if to say ‘Look at me, aren’t I gorgeous?’

When we started thinking about Christmas card ideas for 2019, it struck us that the robin was a missing element, so in the summer, we set about designing the ultimate Christmas robin pop-up card. One that would thrill robin fans, card lovers and anyone who loves to receive a little bit of joy in an envelope.

We asked our designers to make a robin that looked so real, that you’d half expect it to fly off from a distance. We also wanted it perched on a sprig of holly and asked for the cover to be grey. Our manufacturers favour red card for Christmas designs, but we think the grey works really well. The colour is very on trend right now, but it also contrasts nicely with the festive designs in their bright reds, greens and yellows. In this case, the little robin really pops. We think it’s a stand out handmade Christmas pop up card.

I have one of the robin cards on top of my filing cabinet because it is such a joyful sight. It’s already selling well and it’s coming with us to our first Christmas fair on Sunday. I’m expecting him to fly off the shelves.

We have many animal cards – a kangaroo, a shark and a panda to name of few, but there is something extra special about the pop-up bird cards I think. We’ve been selling the red cardinal pop-up card for years and I love how detailed the nest is. It’s fair to say though, that our new robin is our best creation yet.

Did you know that the bird got its nickname ‘robin redbreast’ as this was the nickname given to early postmen who wore red jackets and became known as robins?  It is also said that a robin pulled out a thorn from Jesus’s crown and that it was his blood that created that famous redbreast. In 1960 the robin was voted our national bird and hence Christmas robins appeared on greetings cards. Long may it continue! 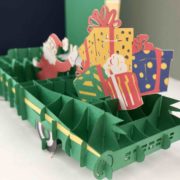 Pop-Up Christmas has arrived…
Does your business card stand out?

This is how our cards business started
Scroll to top
I don't feel lucky
Free UK postage
Nearly!
Boo!
Almost!
20% Discount
Free mystery card
No Prize
No luck today
Almost!
£20 gift card
Sorry
Unlucky
Try your luck and win a prize!
Enter your email address and spin the wheel to be in with a chance of winning a prize or money off
Our in-house rules: